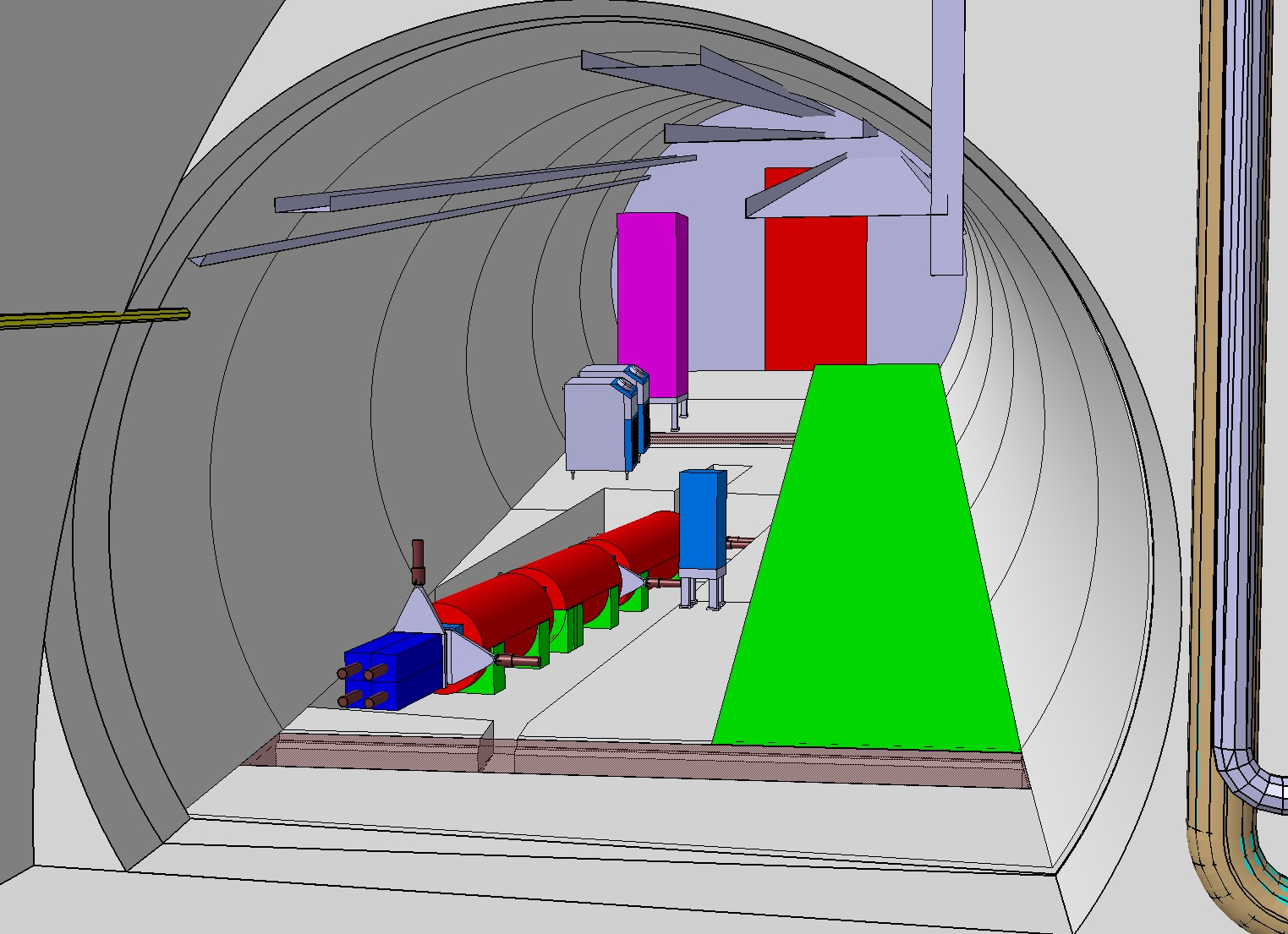 The FASER detector has been installed along the beam collision axis line of sight (LOS), in the side tunnel TI12, 480 m downstream from the ATLAS interaction point (IP). At this point, the main LHC tunnel starts to curve away from the LOS, as shown in Fig. 1. The TI12 tunnel was formerly used to connect the Super Proton Synchrotron (SPS) to the Large Electron–Positron (LEP) Collider at CERN’s Meyrin site just outside Geneva, but it is currently empty and unused, as illustrated in Fig. 2. The beam collision axis passes through TI12 close to where it merges with the main LHC tunnel. Detailed study of the intersection between the beam collision axis and TI12 verified that there exists space for FASER in the tunnel. Because of the sloped geometry of TI12, the LOS enters TI12 just below the tunnel floor, but then emerges above the floor. Measurements from the CERN survey team showed that, by excavating a 50-cm-deep trench in the TI12 floor during Long Shutdown 2 (LS2), in the TI12 floor, sufficient space would be created to house the ~5 m long FASER detector, as illustrated in Fig. 3.

Fig. 4 shows schematically how light, long-lived particles (LLPs) produced at the ATLAS IP will travel through various components of the LHC infrastructure on their way to FASER. These components include the neutral particle absorber TAN at a distance of 140 m from the ATLAS IP. On the other hand, standard model particles produced at the ATLAS IP will either be deflected by the strong LHC magnets (e.g. the D1 magnet shown in Fig. 3), if they are electrically charged, or otherwise absorbed by the TAN, if they are electrically neutral (photons, neutrons). Additional shielding of the FASER location from the ATLAS IP is provided by the 10 m of concrete and 90 m of rock through which forward-going LLPs must pass through after the main LHC tunnel starts to curve away from the LOS. Eventually, some of the LLPs will be able to decay in the FASER detector located close to the TI12 entrance from the UJ12 region of the main LHC tunnel.

Civil engineering efforts required to place the FASER detector in the TI12 tunnel were completed in LS2. These include lowering the floor of the tunnel so that the detector is positioned centrally along the LOS axis, which required digging a dedicated trench. The dimensions and position of the trench in relation to the tunnel floor and the LOS are shown in Fig. 5. Transport of the detector components including the 1.5-tonne permanent magnet 1.5 m in length and 50 cm in diameter was performed by the CERN Transportation Team. Installation of other service equipment such as dry air, power systems, data readout, and networking devices was done with the help of the CERN EN-CV and EN-EL groups and finished in March 2021.