The FASER detector has been designed to be sensitive to new-physics-induced signal events from decays of light long-lived particles, as well as to achieve the best rejection of standard model background. The characteristic features of the signal events are striking: two oppositely charged tracks (or two photons) with very high energy (∼TeV) that emanate from a common vertex inside the detector and which have a combined momentum that points back through 10 m of concrete and 90 m of rock to the ATLAS IP. A measurement of individual tracks with sufficient resolution and an identification of their charges is therefore imperative if the apparatus is to make use of kinematic features to distinguish signal from background. A tracking-based technology, supplemented by a magnet and a calorimeter to allow for an energy measurement, are the key components of FASER. A schematic view of the detector and its several major components used to properly identify such signal events are shown below.

At the entrance to the detector, two scintillator stations (shown in gray) are used to veto charged particles coming through the cavern wall from the IP; these are primarily high-energy muons. Between the stations is a 20-radiation-lengths-thick layer of lead that converts photons produced in front of FASER into electromagnetic showers that can be efficiently vetoed by the scintillators.

The veto stations are followed by a 1.5 m long, 0.55 T permanent dipole magnet with a 10 cm aperture radius (red). This is the decay volume for light long-lived particles decaying into a pair of charged particles, where the magnet providing a horizontal kick to separate the decay products to a detectable distance.

After the decay volume is a spectrometer consisting of two 1 m long, 0.55 T dipole magnets with three tracking stations, which are located at either end and in between the magnets. Each tracking station is composed of layers of precision silicon strip detectors. Scintillator stations for triggering and precision time measurements are located at the entrance and exit of the spectrometer. The primary purpose of the spectrometer is to observe the characteristic signal of two oppositely-charged particles pointing back towards the IP, measure their momenta, and sweep out low-momentum charged particles before they reach the final layer of the spectrometer.

The performance of the detector and quality of physics results crucially depend on trigger and data acquisition systems. Due to low background, the read out of the full detector is triggered on every detectable high-energy particle passage. In addition, a new-physics-induced signal should not trigger front scintillators used for vetoing purposes.

An additional subdetector, dubbed FASERν, is placed in front of the main FASER detector and is dedicated to the FASER neutrino programme. It is a 25 cm × 30 cm × 1.04 m emulsion detector, consisting of 770 layers of emulsion films interleaved with 1 mm-thick tungsten plates. The total tungsten target mass of 1.1 tons will guarantee about 20k neutrino interactions during LHC Run 3 to be studied in FASERν.

A sketch of the detector design is shown below. 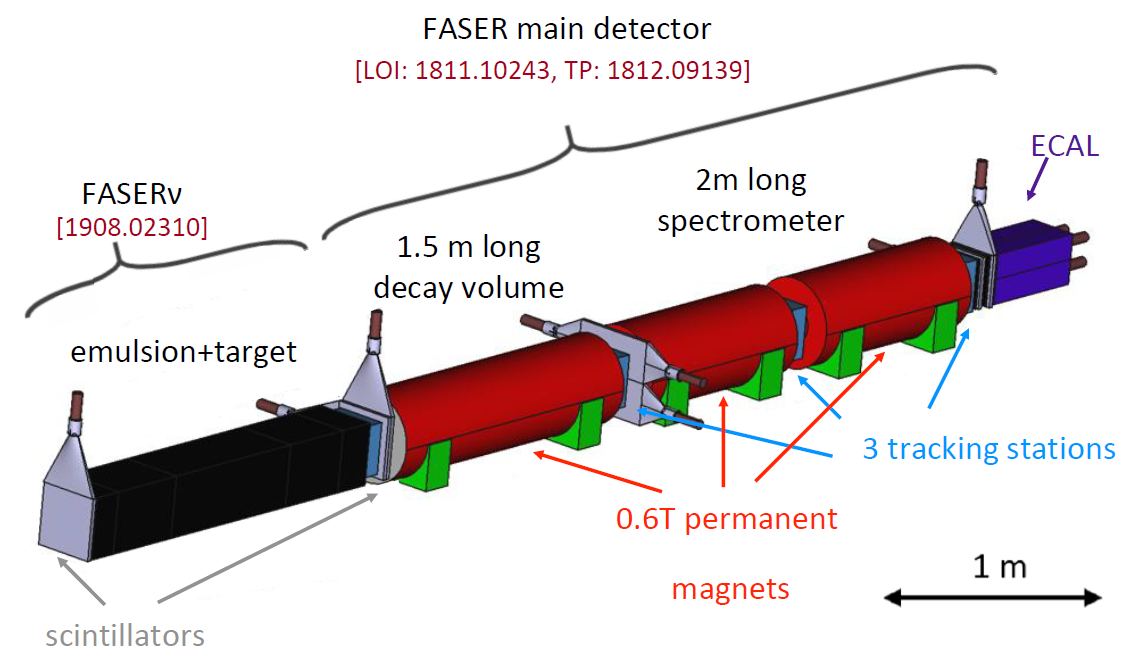