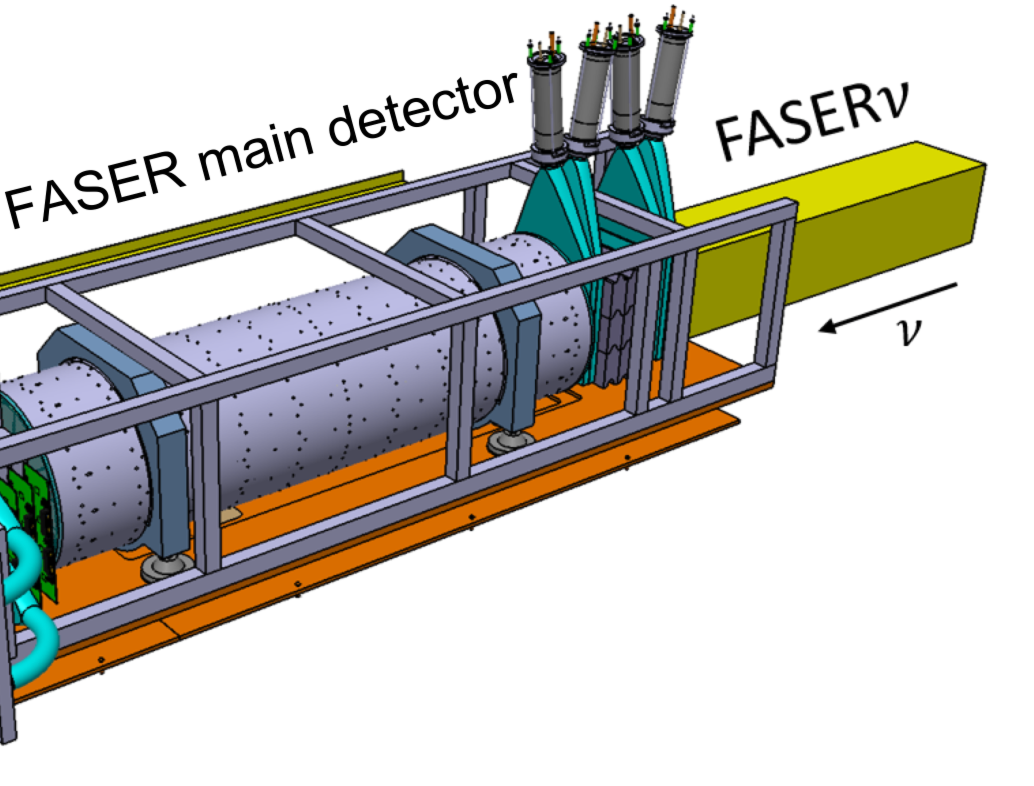 To date, no neutrino produced at a particle collider has ever been detected, despite the fact that colliders are copious sources of neutrinos. In LHC Run 3 during 2021-23 at 14 TeV center-of-mass energy, roughly 1011 electron neutrinos, 1012 muon neutrinos, and 109 tau neutrinos (along with comparable numbers of anti-neutrinos) will be produced in the far-forward region of the ATLAS IP. These neutrinos will have TeV-scale energies (the highest man-made energies currently available), and detection of these neutrinos will extend the LHC’s physics program to new avenues, opening up a new source of neutrinos to detailed study. The FASERν addition to FASER is a small and inexpensive subdetector which will be able to detect the first collider neutrinos and usher in a new era of neutrino physics at colliders.

To study all three neutrino flavors, the detector should be able to identify the e, μ, and τ leptons produced by charged current (CC) neutrino interactions. This can be efficiently accomplished in FASERν thanks to the use of an emulsion detector. Emulsion detectors have spatial resolutions down to 50 nm, better than all other particle detectors. A typical emulsion detector consists of silver bromide crystals with diameters of 200 nm dispersed in gelatin media. Each crystal works as an independent detection channel. The high density of detection channels (~1014/cm3) makes emulsion detectors unique for detecting short-lived particles.

The FASERν neutrino detector is placed in front of the FASER main detector, as shown in Figures 1, 2 and 3. It is located on the collision axis line of sight (LOS) to maximize the number of neutrino interactions. Figure 4 shows a magnified view of the neutrino detector modules. The detector is composed of a repeated structure of emulsion films interleaved with 1 mm-thick tungsten plates. The 25 cm × 30 cm emulsion film is composed of two emulsion layers (each 70 μm thick) which are poured onto both sides of a 200 μm-thick plastic base. The tungsten target was chosen because of its high density and short radiation length, which helps keep the detector small, localizing electromagnetic showers to a small volume. The whole detector has a total of 770 emulsion films with a total tungsten target mass of 1.1 tons, and its length corresponds to 220 radiation lengths and 7.8 hadronic interaction lengths.

As the emulsion detector lacks time resolution and records all charged particle trajectories, event pileup poses an issue. The emulsion detector readout and reconstruction function for track densities up to ~106 tracks/cm2— to keep the detector occupancy below this level, the emulsion films are replaced during every technical stop of the LHC, which will occur every ~3 months. This corresponds to 10−50 fb−1 of data in each data-taking period. Assuming seven replacements during LHC Run 3 (one in 2021 and three in each of 2022 and 2023), a total emulsion surface area of 440 m2 will be used.

Thanks to the high density of TeV-energy muons crossing FASERν, the emulsion films can be aligned precisely. The expected position resolution of each hit in the emulsion detector is given by σpos = 0.4 μm. The angular resolution depends on the track length, and for 1 cm-long tracks it is expected to be σangle = 0.06 mrad.

As shown in Fig. 4, the classification of νe, νμ, and ντ CC interactions is made possible by identifying the e, μ, and τ leptons produced. Electrons are identified by detecting electromagnetic showers along a track. If a shower is found, the first film with activity will be checked to see if there is a single particle (an electron) or an e+e− pair (from the conversion of a photon from a π0 decay). The separation of single particles from particle pairs will be performed based on the energy deposit measurements in FASER's electromagnetic calorimeter.

More details about FASERν neutrino detector are given in FASER's neutrino study and the Technical Proposal for FASERν.